Please Note: The editor of White Refugee blog is a member of the Ecology of Peace culture.

Ecology of Peace RH factual reality: 1. Earth is not flat; 2. Resources are finite; 3. When humans breed or consume above ecological carrying capacity limits, it results in resource conflict; 4. If individuals, families, tribes, races, religions, and/or nations want to reduce class, racial and/or religious local, national and international resource war conflict; they should cooperate & sign their responsible freedom oaths; to implement Ecology of Peace Scientific and Cultural Law as international law; to require all citizens of all races, religions and nations to breed and consume below ecological carrying capacity limits.

End is Near for Zimbabwe's Last White Farmers - VOA


Zimbabwe's Supreme Court heard a case on behalf of three farmers who claimed the constitution excluded confiscation of their land because they bought their properties after the colonial era ended with independence in 1980.

The Supreme Court did not agree and quickly dismissed their application.

One of the farmers, Colin Cloete, a former president of the Commercial Farmers’ Union at the height of often violent land invasions seven years ago, was one of the applicants.

He, like many of his colleagues, has been arrested, harassed and appeared in court many times, to try to stay on his farm.

Like most surviving white farmers, the cost of going to court to try to fight his eviction has been unaffordable.

Looking back over the long and difficult years, Cloete, now 58, said his struggle to remain on his farm did not make economic sense.

“Economically we should have moved off then, at the beginning, as we would have been 10 years younger and that much more energetic,” said Cloete.

Cloete said he had begun looking looking for a house in Harare, not least so he could move his possessions to safety.

He said the land invasions launched after Mr. Mugabe lost a referendum in 2000 had hurt him and Zimbabwe’s economy, and no one had benefited from this except the elite in the ZANU-PF Party.

Farmer Ken Bartholomew, who was born on his farm, said if he had known what the future held in 2000, after land invasions began, he would have quit farming immediately.

“I would have moved off and done something else, not what I have gone through, with the stress and the amount of finance we have used to fund courts, lawyers. I would have left,”said Bartholomew.

“The writing is pretty much on the wall for us. We have been fighting for how many years now to try and continue to try and find a way of dialoguing to resolve the conflict in an amicable way, but all the doors have been closed on us,” Theron said.

Mr. Mugabe and his ZANU-PF Party changed the constitution in 2005 to make all white farms named for acquisition in local newspapers, state property.

Very few evicted white farmers have received compensation for the loss of their homes and businesses on the farms.

Most of Zimbabwe’s top politicians and public servants, including judges, among them those presiding at the Supreme Court are beneficiaries of white-owned farms.

Most farmers say that without dramatic and urgent political change, the only white farmers who will survive in the short term are those who have made private arrangements with district political warlords loyal to ZANU-PF.

The 27-month-old inclusive government, which includes the majority party, the Movement for Democratic Change, has failed to rescue any white farmers from eviction.


Farmer who took Mugabe to court dies of his injuries 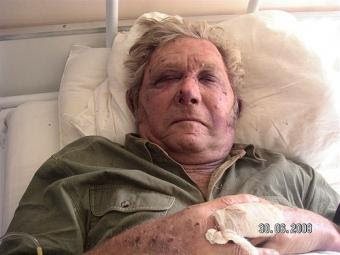 Mike Campbell (79), the Zimbabwean commercial farmer who made legal history when he took President Mugabe to the international court of the Southern African Development Community (SADC) Tribunal in 2007 and won the case a year later, passed away at his temporary home in Harare on April 6.

Campbell never recovered from the abduction and brutal beatings meted out to him, his wife Angela and son-in-law Ben Freeth by Zanu-PF thugs late at night in a remote militia camp on June 29, 2008 just two days after the Presidential run-off election.

Eventually their captors forced them at gunpoint to sign a paper stating that they would withdraw from the SADC Tribunal court case, due to be heard in Namibia the following month. They were dumped outside the town of Kadoma from where they were rushed to hospital.

Campbell sustained severe head injuries which resulted in brain damage, broken ribs and damage to his lower limbs caused by a crude and brutal torture method known as falanga.

This involves beating the soles of the feet with iron bars, logs or cables and can result in permanent disability or death due to kidney failure. Campbell’s medical report noted that severe force had been used and that the possibility of permanent damage was likely.

A dedicated farmer and conservationist, Campbell purchased Mount Carmel farm in the Chegutu district in 1975 and spent the next 24 years paying back the loan.

The farm was transferred legally into the family’s company name in 1999 on receipt of a “certificate of no interest” from the Mugabe government which had the first purchase option on any sale.

The judge said the state-sponsored mob violence, which saw white famers’ land seized and shared out among President Robert Mugabe’s cronies, was akin to genocide.

A woman who admitted taking part in savage evictions of white farmers from their homes in Zimbabwe lost her bid for asylum after a High Court judge accused her of ‘crimes against humanity.’

Mr Justice Ouseley threw out the widowed mother-of-two’s appeal to remain in the UK after she confessed to beating up ten people during two land invasions.

The judge said the state-sponsored mob violence, which saw white famers’ land seized and shared out among President Robert Mugabe’s cronies, was akin to genocide.

‘We are satisfied that the two farm invasions were crimes against humanity,’ he said, likening the 39-year-old woman’s role to a concentration camp guard who followed Nazi orders during the Holocaust.

The woman, who cannot be named, came to Britain illegally in 2002 and did not claim asylum until six years later.

Her bid for refugee status was rejected on the grounds that her own violent actions in Zimbabwe disqualified her from humanitarian protection in this country.

She admitted to being part of a gang of thugs from Mugabe’s Zanu-PF party who invaded two white-owned farms intent on causing maximum terror and driving away black workers.

The woman, referred to only as ‘SK”, agreed she had beaten up to ten people whilst their homes burned, ‘inflicting enough pain to get them to run away.’

She said that on one occasion, she beat a woman so badly she thought she would die.

However, she insisted she had taken part in the raids under duress to prove her loyalty to Mugabe’s regime and she had never intended to kill anyone.

FAIR USE NOTICE: The Crime of Apartheid blog contains copyrighted material the use of which has not always been specifically authorized by the copyright owner. We are making such material available in our efforts to provide information for research and educational purposes, and advance understanding for the Boer Volkstaat 10/31/16 Theses Petition and Briefing Paper submitted to EU & NATO. We believe this constitutes a 'fair use' of any such copyrighted material as provided for in section 107 of the US Copyright Law. If you wish to use copyrighted material from this site for purposes of your own that go beyond 'fair use', you must obtain permission from the copyright owner. In accordance with Title 17 U.S.C. Section 107, the material on this site is distributed without profit to those who have expressed a prior interest in receiving the included information for research and educational purposes. Copyright owners who object to the fair use of their copyright news reports, may submit their objections to Crime of Apartheid Blog at: [jmc.pa.tf(at)gmail(dot)com]

As noted at LJ v B Blanton: As of 17 October 2013, Lara Johnstone is a member of the Ecology of Peace Radical Honoursty culture. Ecology of Peace v Masonic War is Peace NWO Negotiations are updated at EoP MILED Clerk.

“[Apartheid] is a policy which sets itself the task of preserving and safeguarding the racial identity of the White population of the country, of likewise preserving and safeguarding the identity of the indigenous people’s as separate racial groups....... The choice before us is one of these two divergent courses: either that of integration, which would in the long run amount to national suicide on the part of the Whites; or that of apartheid ... to preserve the identity and safeguard the future of every race....”
-- Dr. Malan's National Party, 1947, as referenced in 10 January 1964 Counter-Memorial filed by Apartheid Gov. of the Rep. of S. Africa (Books I-IV), p.463/473; International Court of Justice (www.icj-cij.org)

Crime of Apartheid: Falsification of History!

The Radical Honesty-RSA Amicus Curiae to the Constitutional Court (PDF), in the matter of The Citizen v. Robert McBride, finds the TRC's alleged 'crime of apartheid' conclusion to be a falsification of history.
-- Guerrylla Law (www.guerrylla-law.co.nr)
-- CENSORED BY SA MEDIA; ARGUMENT IGNORED BY CONSTITUTIONAL COURT --

In 1962 Liberia and Ethiopia accused South Africa of committing ‘crimes of apartheid’ in South West Africa, at the International Court of Justice in the Hague.

What is a Race Realist?

“Race realism is rejection of the agreeable fantasies about race that have become orthodoxy since the 1960s. First, it is obvious that most people prefer the company of others of their own race. Forced integration therefore causes tension and resentment.....”
-- AmRen's Jared Taylor defines and explains Race Realism...